The cypress grove on Telegraph Hill before, during, after.
As promised, befores and afters. 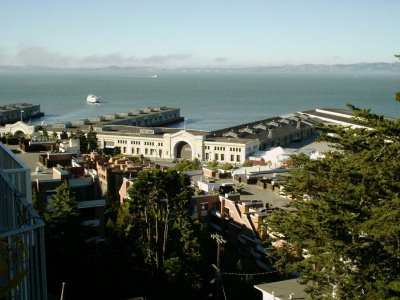 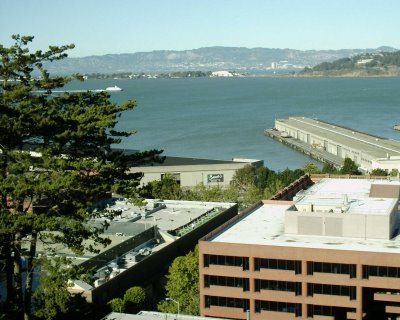 I rummaged through my photo bins to find photos of the trees as they were. These two show the north and south ends of the cypress grove on 18Jul2004. Imagine, if you will, a large clump of green between what these two photographs show.

I obviously didn't take a lot of shots of the trees standing alone.

Later that year, in October, a large chunk of tree came down.

In October 2005, another tree was taken out before Mark threw himself between the trees and the tree cutters and successfully halted the project.

We all know the result: a Landmark Tree ordinance. After much negotiation, in February 2007 the City agreed to indemnify the remaining trees' owner from any liability arising from the fact he wasn't allowed to take the "rotten" (his description) trees down.

The City also agreed "to hire a special arborist who has the skill to delicately prune the trees and preserve them for at least three years -- long enough for new ones to grow to shelter the parrots. The two trees are all that remain from what was once a larger grove." [n.b. Three years to grow trees this tall? Really?]

The Northeast San Francisco Conservancy (president: Nancy Shanahan) pledged $5,000 to the City to cover the cost of pruning and care. 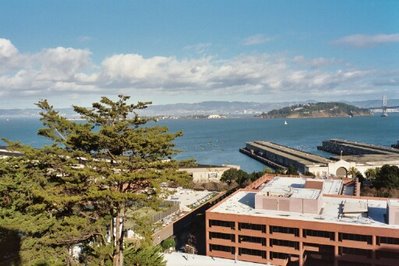 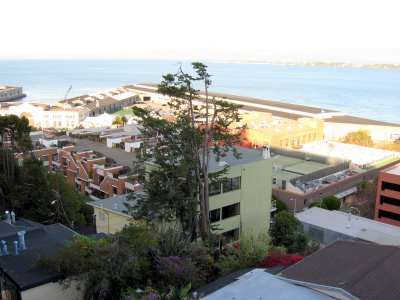 What can we see that's different? (Gee, this is like those picture puzzles: find six ways this picture is different from the ones above.)

In 2004, the cypress grove obstructed the view of most of the green building you can now see to the northeast of the trees. We can now see the tennis courts on top of the Bay Club.

The trees in 2004 were considerably taller than the trees that remain. We have an uninterrupted view of Treasure Island instead of having trees obstructing our views of the northernmost third of the island. We can also see more of Teatro Zinzanni -- those tents down at Pier 29 -- and twice as much of the rooftop of the condo building to the north of the green building. 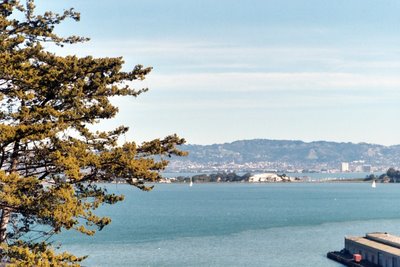 I'd taken this shot to show the tidal bore on a very boring day, but it also shows what our view of Treasure Island was in May 2004. That's a whole lot o' tree that's been taken down in the last three years.

I have mixed feelings about all this. I love trees. I miss the green stuff -- I much prefer green stuff to views of the neighbors' roofs -- but I think there was far more agitation over the poor parrots and this privately-owned cypress grove than there needed to be. I think the City spent more time and effort -- when they don't seem to have time to worry about some critical problems -- than the situation warranted. I know Mark loves the parrots and I know he made them famous with his book. If someone had said we should spare the trees, if at all possible, because they're right outside Mark's door and he wants to have the parrots right there, well, I could understand that, but that's not how all the agitation and public spin came down before the City set about changing rules, trimming trees and indemnifying the owner.

May the flock prosper and increase.