Tree trimming ... and it isn't even Christmas! 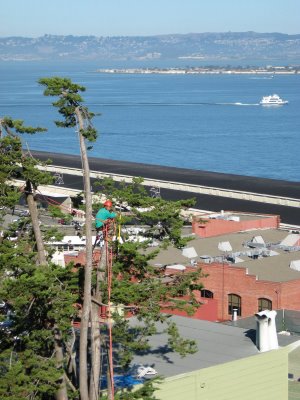 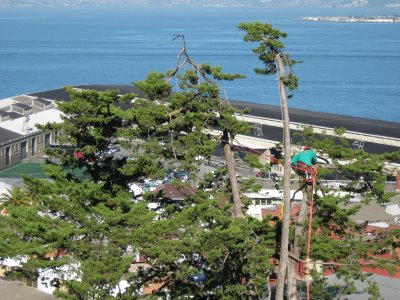 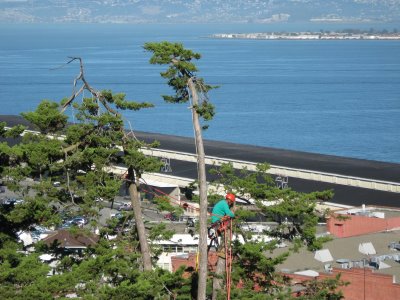 Talk about a job I wouldn't want! I can't even stand at the edge of the roof without getting shaky knees.

Tree trimmers are trimming the trees down the hill from us, trees which caused such political uproar a year ago or so and resulted in new rules regarding tree cutting on private property. Siblings of the trees were taken out three years ago. These remaining trees are supposed to remain in place and be taken care of until they can't be maintained. The City's indemnified the owner from any lawsuits that might arise should the trees topple over or break a limb.

The guy up in the tree checks his knots frequently. He has an ally on the roof of the building just east of the trees and an ally on the ground, who is cutting the fallen branches with a chain saw. The guy in the tree has done most of his work with a tree saw on a long pole but just now switched to a chain saw.

Earlier today, the neighborhood e-mail list flashed with a "someone's cutting the cypresses" note, followed by a note from Mark Bittner that the cutting was all in order.

The neighbors are watching. The parrots are sitting on someone's railing to get a better view of what's going on because their usual tree perch doesn't have a good line of sight for the trees being trimmed.

Update: Gone for the day. Ropes still in trees.