Even Aaron's gotten into the spirit of things, making a half-hearted attempt to eliminate the San Francisco Department of the Environment -- firing all its employees, keeping only the department director -- because Jared Blumenfeld, the director, is against the proposed new natural-gas-burning power plant at Potrero Point.

Ah, the smell of politics in the morning.

What is this proposed power plant and why is it taking so long to make a yay or nay decision?

Well, part of the time delay is due to political maneuvering, part of it is due to neighbors who don't want any power plant at all in their backyard (although how to shut down the existing Potrero Point power plant without creating the energy resources required by the California Independent System Operator ("CAISO") is a question) and part of it is due to folks, including Jared Blumenfeld mentioned above, who want San Francisco not to build a fueled plant but instead to tap into wind/sun/wave generation to provide the energy required by CAISO and the FEC. 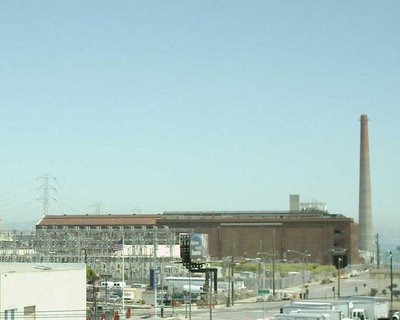 Above is a picture of the existing Mirant power plant, located at Potrero Point, at the edge of the Bay at 23rd Street.

The Mirant plant consists of the natural-gas-fueled Potrero Unit 3 and three diesel-fueled peakers -- Units 4,5, and 6. The plant uses "once-through" cooling, sucking 206 million gallons of water a day from San Francisco Bay and returning scalding, polluted water. The current facility operates 24/7 and is estimated, even with equipment refurbishment, to be years past its operating usefulness. Dainty, isn't it?

The city-owned power plant will consist of three "peakers" -- combustion turbines that supply electricity only when demand is high and existing power resources are inadequate -- each with an 85' high exhaust stack. (The exhaust stack at the existing Mirant facility, shown in the photo, is 280' high.) The three natural-gas combustion turbines for the plant were part of a legal settlement by Williams Energy. The turbines will supply 150MW and will tie into the power substation at 23rd and Illinois. (You can see the substation on the left in the photograph.) A fourth turbine received in the settlement will be installed at the airport.

With the installation of the new plant, the way is open to shut down the Mirant facility, which has a RMR (Reliability Must Run) designation and cannot shut down as long as there is insufficient In-City energy resources to replace it. CAISO's requirement was 150MW of generation in San Francisco proper, which is why the plant has to be located within the City limits.

The Trans Bay Cable project -- to be operational first quarter 2010 -- will bring an additional 400 MW into the City. Between the peaker turbines and the TBC, CAISO feels that the City will meet the FEC requirement for reliable power and will move to remove the RMR designation for the existing Potrero Point power plant.

Shutting down the Mirant plant is a high priority not only for people who live in the area but also for some of the movers and shakers downtown at City Hall. This is good. I'd willing trade three relatively-clean peakers for the Mirant monster belching particulates into the air and spewing 206 million gallons of scalding, polluted water into the Bay every day.

Did you know the park at the water's edge on 24th Street sits at Warm Water Cove? Will they have to change the name once the Mirant plant is shut down?