One last picture of Venice
Well, the last for now.

A Vassar graduate (Class of 1882), an artist, a maiden lady, a San Francisco resident, MBB spent a month each summer  summers (more than a month, according to his nibs upwards to three months at a time) at a villa on Lake Como and for years traveled on her own, finding her way to Pompeii, the Arabian Peninsula, Afghanistan, Japan, cities across Europe and over hill and dale elsewhere. She took hundreds of pictures of her travels using an early model Kodak camera.

Family history has it that she stopped traveling abroad in spring 1912. She'd booked the return trip on the Titanic's maiden voyage and, after hearing news of the disaster, decided that perhaps she'd traveled long enough.

Amongst other photographs in the envelope his nibs brought up was this one. Taken 115 years ago. Seems MBB was enchanted by Venice's bridges and canals too. She took this shot from a perch in a gondola. 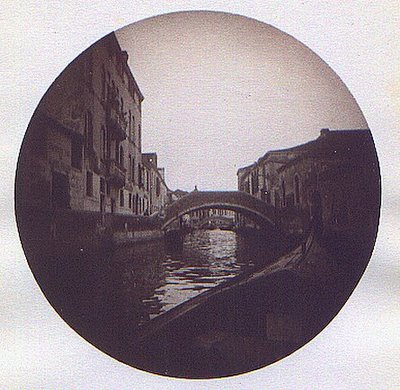