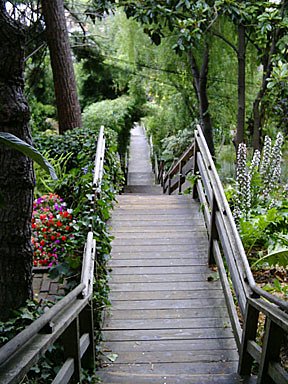 [31 Jul 2004, San Francisco] A look down the Filbert Steps through the Grace Marchant public gardens. Darrell Place, a concrete sidewalk -- a public "street" with no car access -- takes off from Filbert to the left (north) from where you're standing. Further down the Steps, Napier Lane, a boardwalk "street," takes off to the north as well. You can't see your destination which is Sansome Street -- a "real" street -- at the bottom of Telegraph Hill.

The Steps angle off to the right at the point where they disappear in this picture and turn into a concrete stairway, cantilevered over the base of Telegraph Hill. When the Steps reach the bottom of the hill, Filbert Street becomes a "real" street again, as it was before it became Steps, just west of Coit Tower.

Only two hundred and thirty-some steps from here to the bottom. It's coming back up that's hard.